Among the multitude of diseases that exist, the ones that are most difficult to deal with are those that are difficult to diagnose or detect. Until modern science works to find cures and better ways of sniffing out these diseases, it remains important for people everywhere to learn as much as they can about the symptoms of these rare conditions so they can gain comfort and know their options before making decisions about their health. Fibromyalgia is currently one of the most commonly misdiagnosed diseases, so this article will be exploring information about its most common symptoms.

While Fibromyalgia does at times affect men, the majority of people who suffer from Fibromyalgia tend to be women. The women that are most affected are usually between the ages of 25 and 65. The wideness in the gap between ages has contributed to the difficulty in establishing common factors in the diagnosis of the disease.

When these symptoms exist together, they greatly increase the chances that you have, or will develop Fibromyalgia. Some of these symptoms will include: tenderness in certain areas, extreme fatigue, pain in the extremities, abdomen, or the entire body. It is very common for the struggles with many of these symptoms to cause the person dealing with them a great deal of anxiety or depression because they don’t know when they will experience the symptoms, and they can become increasingly fearful of experiencing them. When this set of symptoms appear together, it is called Fibromyalgia syndrome.

Living with Fibromyalgia can present a host of challenges. The fact that it affects women at ten times the rate of men also further complicates things. As time goes on, other symptoms can arise that cause great inconvenience to the person suffering. These can include: incontinence, irritable bowel syndrome, migraines, confusion or difficulty recalling information, numbness in the extremities. People often associate the type of pain that they experience with the symptoms of arthritis, only the negative effects aren’t focused in specific areas and can cover much larger portions of the body.

Even though there is no current cure for Fibromyalgia, positive results have come about from mixing both traditional and natural medicinal techniques. These treatments have included drugs, massage, exercise, and relaxation to help the body heal more efficiently. Healing is always done best when you stay calm and keep stress at a minimum. 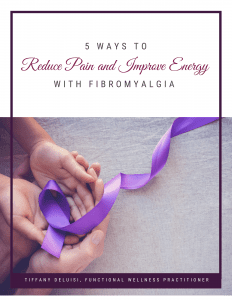 Do you struggle with Fibromyalgia?

If so you need to download my FREE eBook:

© 2022 Fit and Fabulous with Tiffany, LLC. All rights reserved